I found a stored XSS on the /drpanel/drapi/query.php?aptid={ID} endpoint. there was some strong filtering in place that would delete lots of event handlers and HTML tags.

I've explained how I was able to bypass the filterings in depth below after the proof of concept.

When patients want to reserve an appointment they are given a form that they should fill in, the endpoint is /book-appointment.html, but I found out that the Name(fname) and LastName (lname) fields are vulnerable to XSS: 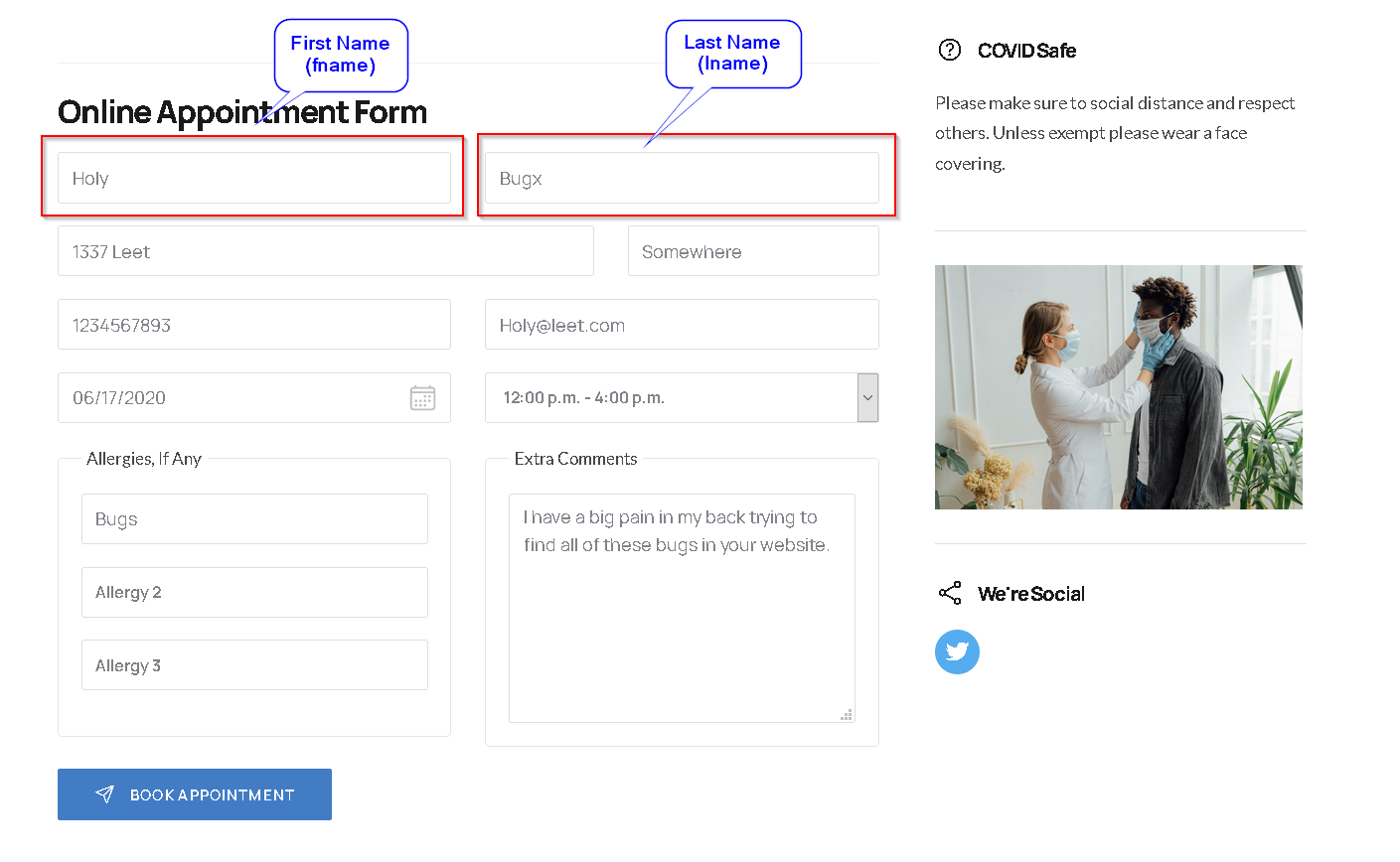 Fill in the form as I showed above and before sending it, intercept the request and send the request to the repeater for later use, this is how your request should look like (of course with your inputted values): 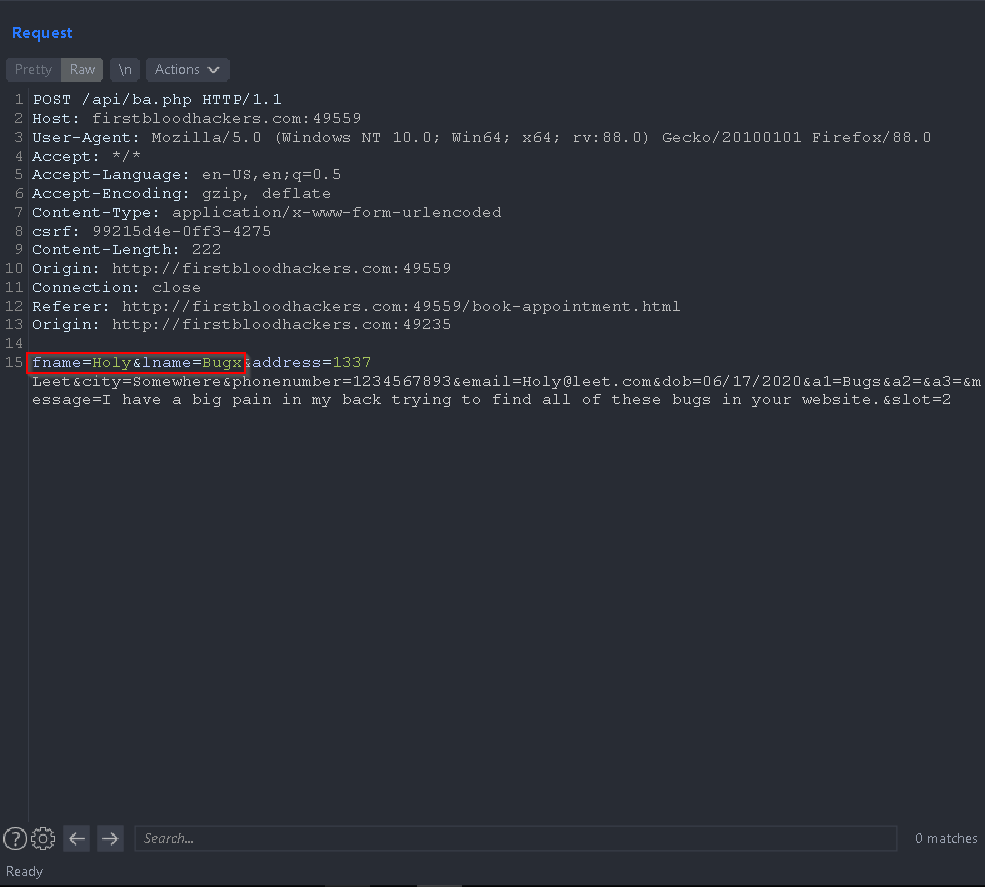 The fname and lname parameters are vulnerable to XSS, and both of them have the same filtering so the payload I'm going to demonstrate works on both parameters.

Using any of those payloads, they are going to be sent over to the doctor's panel

Clicking those will get the information and query the data using the /drpanel/drapi/query.php?aptid={ID} endpoint, you can see this in burp's proxy after clicking the payload in the doctor's panel:

Directly opening the API endpoint shown above executes the XSS, you can use burp's Copy URL to reproduce, also I made the following screenshots demonstrating that both payloads mentioned above work depending on the browser. 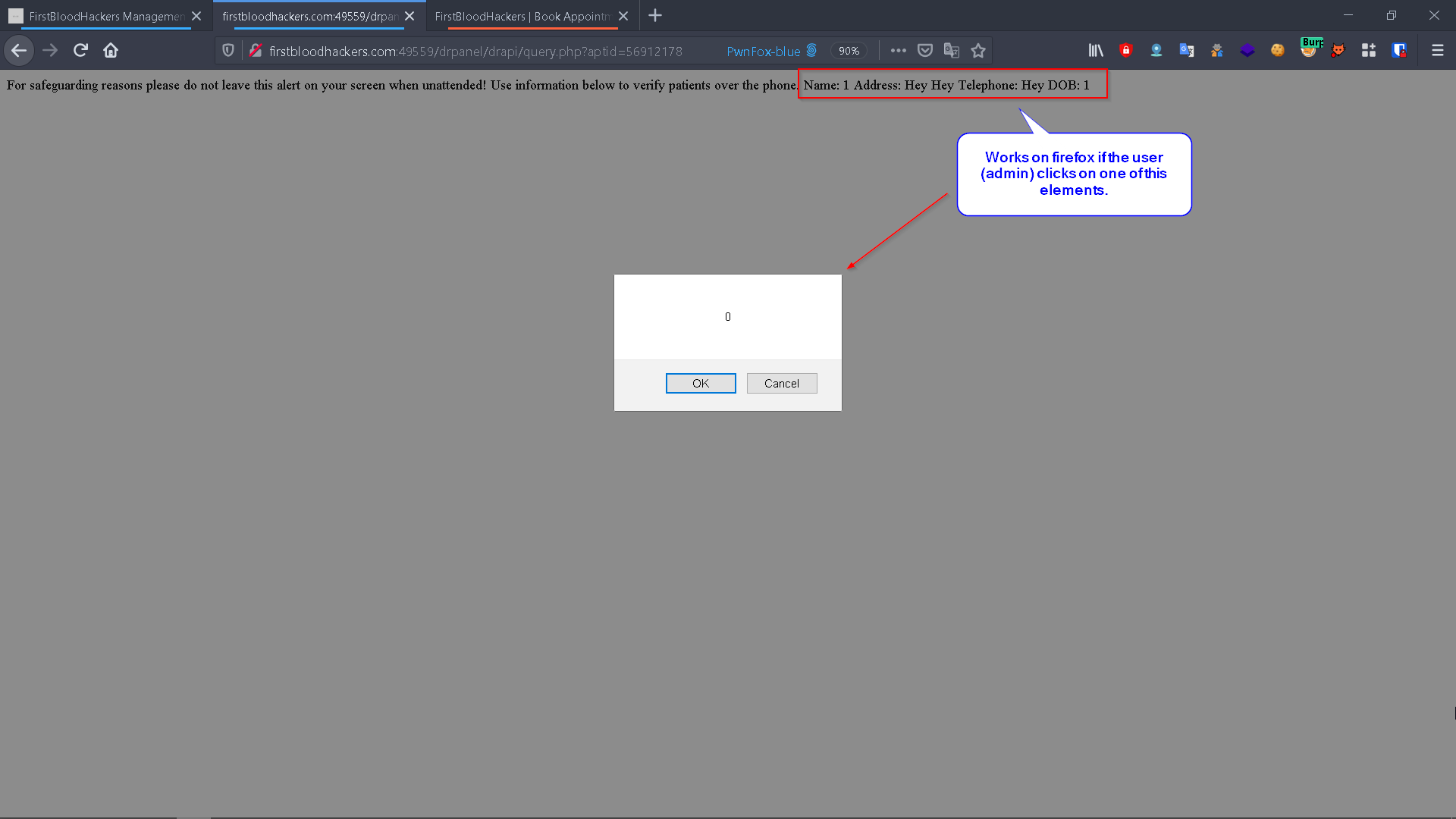 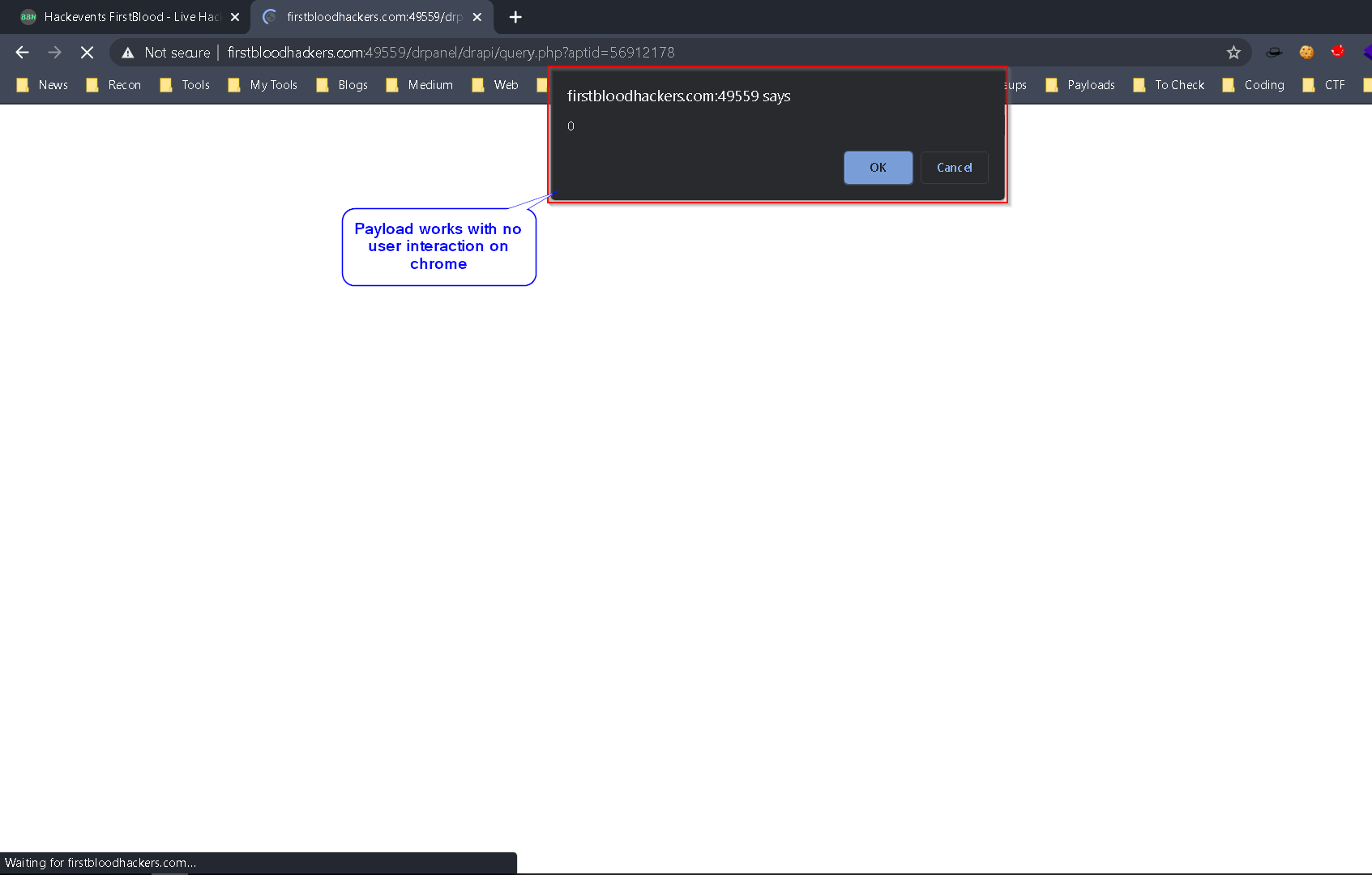 This issue doesn't end here, an attacker can build a payload to send the logged-in admin cookie over to his server and later use them to access his account and do a successful admin account takeover

I modified the first payload I showed above to steal the admin's cookies and send them over to the attacker's server, the final payload is:

Where http://attacker.com is the attacker's controlled domain, opening the injected API endpoint URL results in the redirection of the victim to an attacker's domain and leaking the drps cookie along with it. 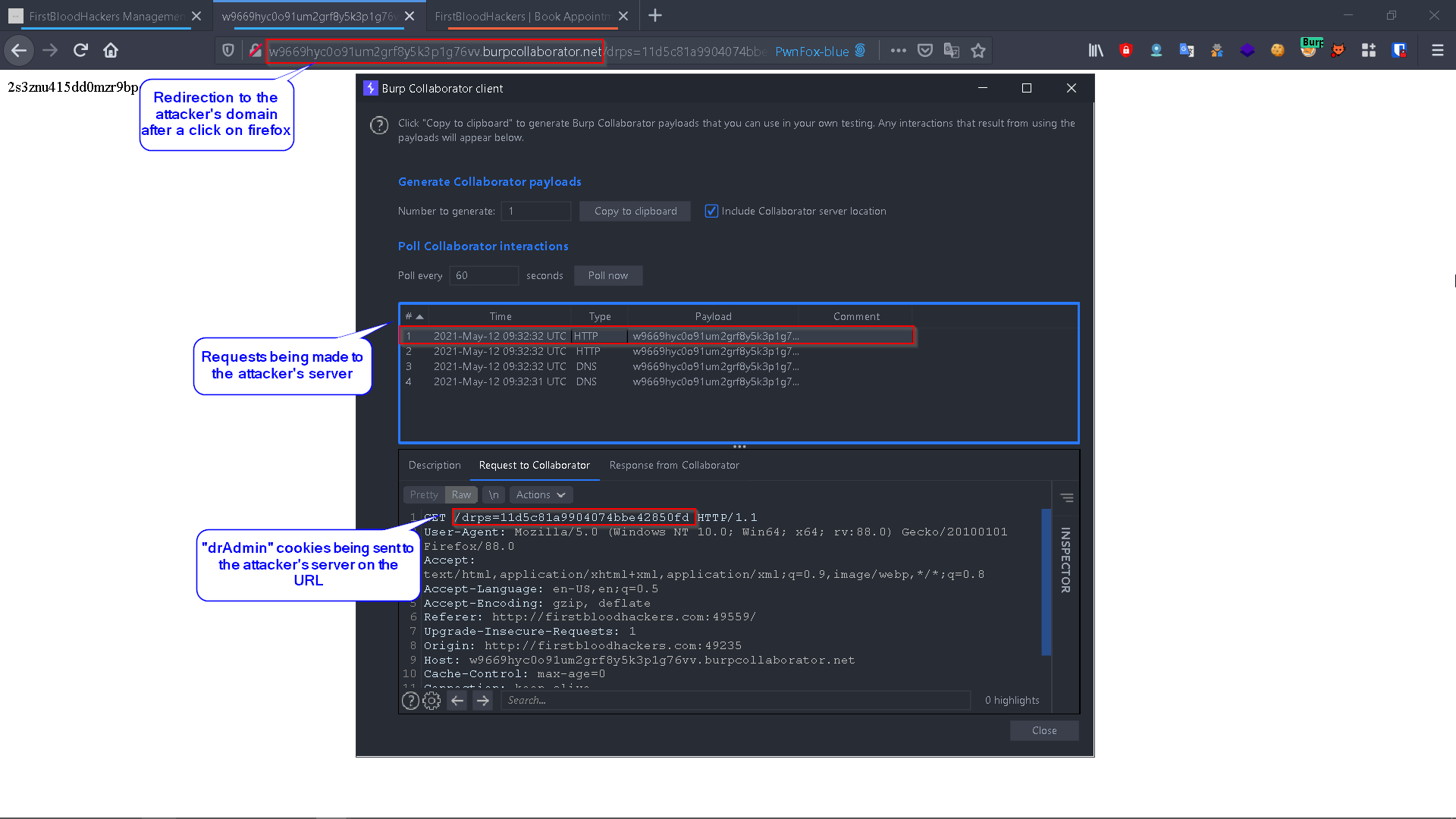 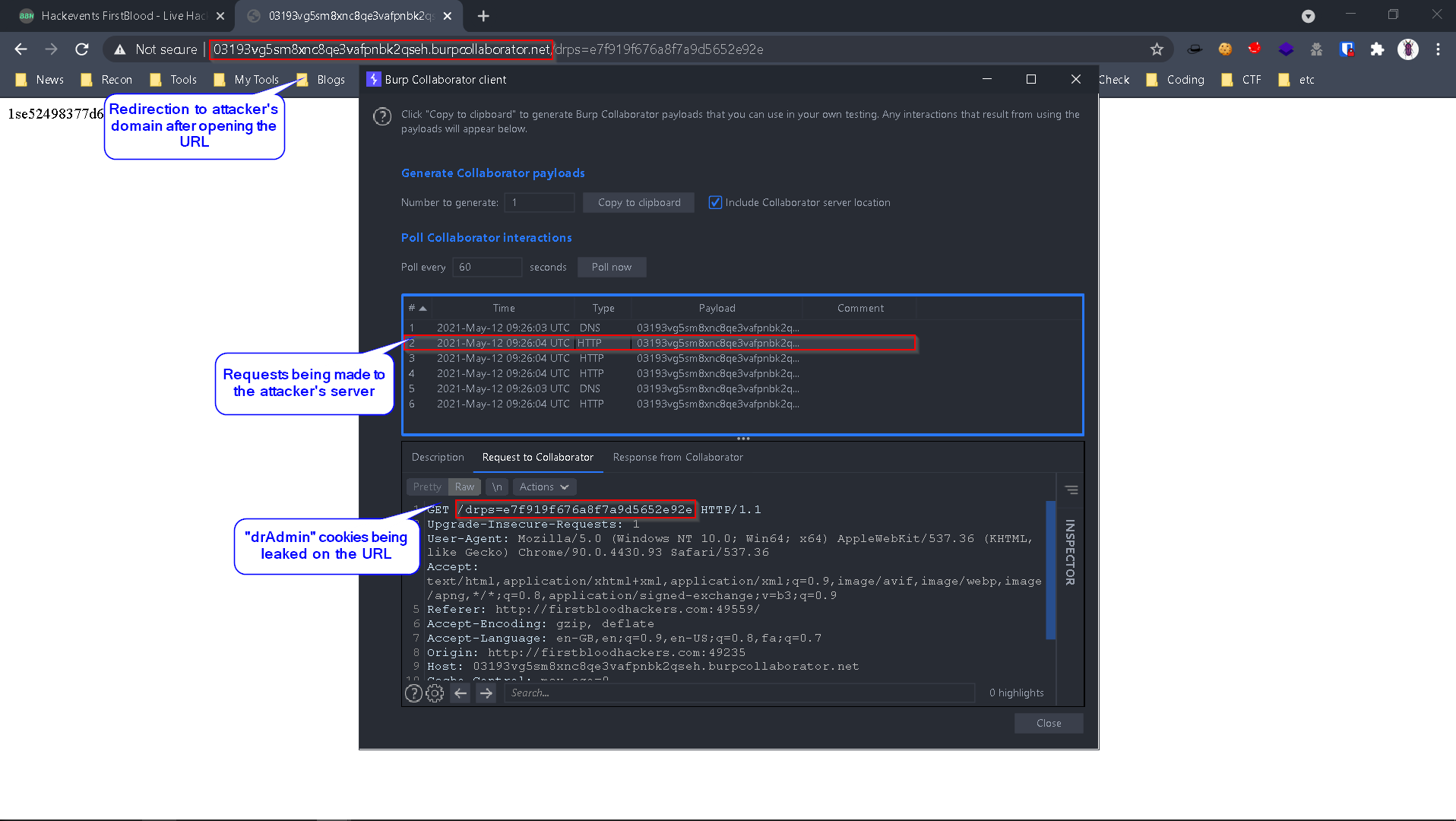 I was able to bypass the filtering in 2 ways:

I built 2 payloads as I mentioned above, that I'm going to explain what I've been through to find those and bypass the filters.

This payload makes use of a custom HTML tag with the onfocusin event handler.

I was close with this one, however, for some reason the = after the event handler was being deleted if "doubling" were detected.

Most of these bypassing techniques were not working, but literally I found out that I can use the onfocusin event handler with no filtering being done

So finally I came up to the conclusion that the following payload works:

Second Payload --> Works without any user interaction on all browsers but chrome:

As I did the filtering bypassing test I've explained above I find out that there another payload that can be put to work, using <marquee> with onstart event handler.

This was not as hard as the first payload, the working payload is:

I had a hard time bypassing the WAF as I described above, However, I just found out that I can include external JS with some tricks to be used.

When creating an appointment, it is possible to get stored XSS /drapi/query.php via the patients name