FirstBlood-#562 — RCE via PHAR deserialization on /api/checkproof.php
This issue was discovered on FirstBlood v2.0.0 (issues patched)

As far as I can tell, the site makes a request to /api/checkproof.php?proof=:file_path which checks whether the file at :file_path exists. This could potentially be implemented by using the file_exists function. However, passing arbitrary user input into functions that work on files can lead to deserialization vulnerabilities by abusing the phar:// stream wrapper.

This article contains a brief explanation of Phar archives and how they can be exploited. A short summary:

How to exploit this

To exploit this an attacker needs three things:

Finding the third part took me a while but it was as simple as fuzzing for some common files. Eventually I found the /composer.json endpoint with the following content:

EDIT: Another endpoint that leaks a large amount of information about installed PHP packages is /vendor/composer/installed.json.

Now that we have all the required parts, we can start working on the exploit. To generate the malicious PHAR archive I used a tool called phpggc. Use the following command to find all gadget chains for monolog:

Based on the version revealed in composer.json all of the chains besides RCE3 could potentially work for us. The one that eventually worked for me was RCE4.

To generate a JPG/PHAR polyglot use the following command:

This payload expects a nc listener on my VPS on port 41328:

The PHAR/JPG polyglot I just uploaded will now get deserialized on the server and I get a shell on my VPS: 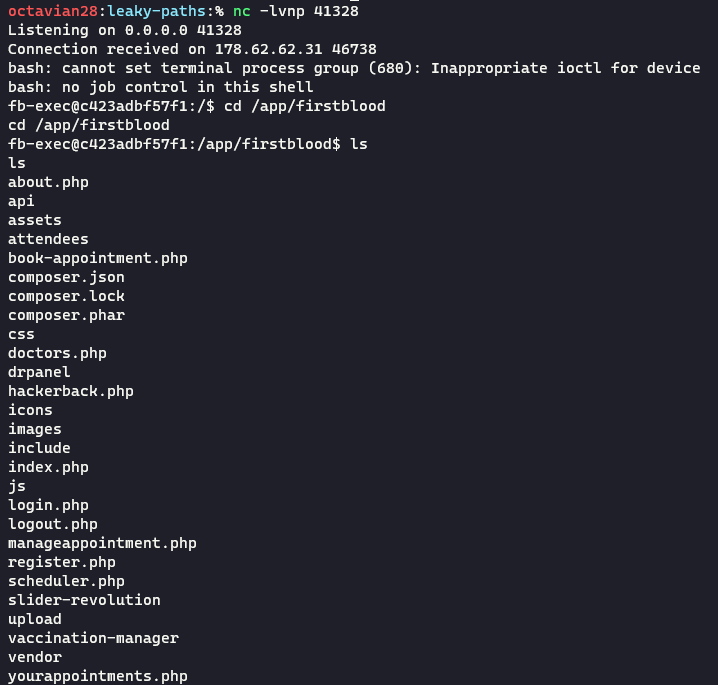 The shell will get closed after a few minutes, but it can be reopened by repeating the request to /api/checkproof.php. There is probably a way to persist the shell but I haven't looked into it yet.

The attacker now has full access to the server as the fb-exec user. Misconfigurations on the server might allow the attacker to elevate their privileges, leading to a full takeover of the server.

The attacker can execute arbitrary commands on your server. This also allows them to get a shell, potentially leading to a full takeover of your server if they can escalate their privileges.

I'm not sure if it's possible to fully deactivate deserializing PHAR archives per default but if you can figure out a way I'd recommend doing that.

Nice find 0x1452! Great work. It is possible to escalate your privileges, feel free to play around! ;)