Insecure Deserialization is possible in the Vaccine Management portal through the file upload. Using this vulnerability I was able to completely take over the server and gain root access on the First Blood's server.

After Directory Brute-Forcing I found the exposed composer.json file which leaks the Monolog package within the version in use:

Monolog is an open-source PHP library that aims to make logging easier and more efficient. Monolog sends logs to files, sockets, inboxes, databases, and various web services. Using Monolog in this attack as a gadget chain with the PHP misconfigurations in the application, it is possible to achieve RCE.

I used PHPGGC which is a library of unserialize() payloads along with a tool to generate them.

And run the following command:

To easily switch between directories and execute commands using the PHP shell we have uploaded before, we can initiate a reverse shell to our server.

What is a Reverse Shell?

To gain control over a compromised system, an attacker usually aims to gain interactive shell access for arbitrary command execution. With such access, they can try to elevate their privileges to obtain full control of the operating system. However, most systems are behind firewalls and direct remote shell connections are impossible. One of the methods used to circumvent this limitation is a reverse shell.

How does a Reverse Shell work?

In a typical remote system access scenario, the user is the client and the target machine is the server. The user initiates a remote shell

The primary reason why reverse shells are often used by attackers is the way that most firewalls are configured. Attacked servers usually allow connections only on specific ports. For example, a dedicated web server will only accept connections on ports 80 and 443. This means that there is no possibility to establish a shell listener on the attacked server.

On the other hand, firewalls usually do not limit outgoing connections at all. Therefore, an attacker may establish a server on their machine and create a reverse connection. All that the attacker needs are a machine that has a public (routable) IP address and a tool such as Netcat to create the listener and bind shell access to it.

How did I get a Reverse Shell?

There are various ways to get a working reverse shell, I used Bash to initiate a connection to my controlled server:

As observed, the reverse shell is working and the attacker has access to the server through the initiated connection. However, the access level we currently have is a normal user i.e. fb-exec. We can try escalating our privilege to the Root user.

In the /app/docker directory there is a crontab file that contains:

The scheduler.php file has write access, which makes it possible for an attacker to write PHP commands inside the file. Whenever the cronjob starts, the command executes as well.

To confirm this, use the following command to get the output of the id command printed in a file:

As observed, the root access has been granted and privilege escalation was successful. To execute various system commands as a root user we can initiate another reverse shell to our controlled server.

Use the following command to initiate a reverse shell connection to your controlled server. This time with Root privileges.

Here is the outcome after the execution of the cron job:

The accessible include/config.php file leaks the SQL database credentials which can be used to access the MySQL Database through CLI:

Use the following command to access the MySQL CLI. Make sure to enter the password when prompted: 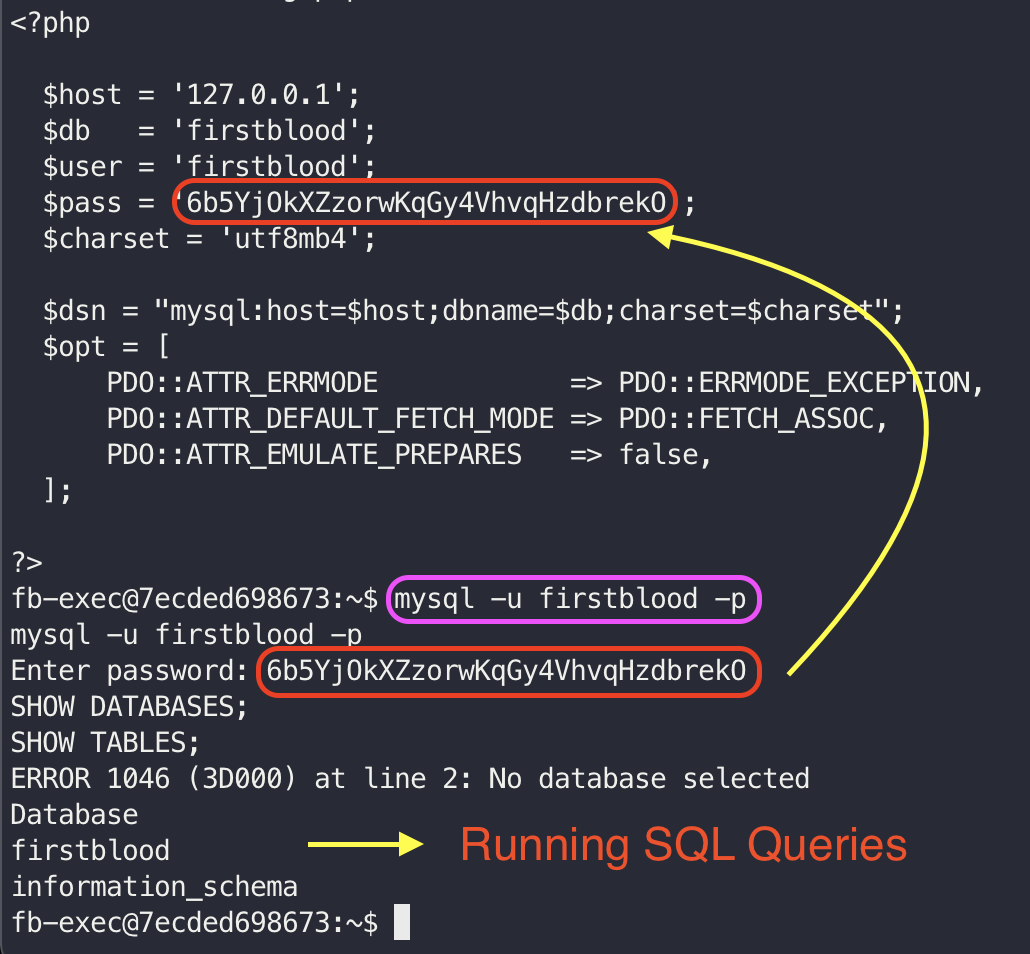 As observed, It is possible to access the SQL database and run various queries using the leaked config files.

This bug makes use of the following vulnerabilities in a chain:

It is possible to use the composer.json to aid with another vulnerability and gaining information/knowledge on versions used.